It’s December. We’re almost to the close of 2008. More on that in some other post. This is a catchup and i have nothing but good things to say.

Annette and i successfully visited the town of Astoria, Oregon where the Columbia River meets the Pacific Ocean. We couldn’t agree, but i think this is at least our sixth visit. We took the Vanagon and camped at Fort Stevens. Long drive. Longer in a VW. I’m happy to report the town itself seems to be doing well. There are new businesses open, many of the previous businesses have survived.

As always we ate at the Wet Dog Cafe twice, eschewing the guilded tourist restaurants. I mean, we can get the same fresh seafood at the same dock they do… our wine list is bigger, better and cheaper; why pay a premium to sit in a redecorated former card shop on Main St? To be seen doing so? Feh! I’ll leave that to others. We bought crab cake dough in Ilwaco on the Washington side and ate crisp crab cakes with sauteed diced butternut squash mated with a nicely chilled Carneros sparkling in our Vanagon. A hermit crab shell built for two. 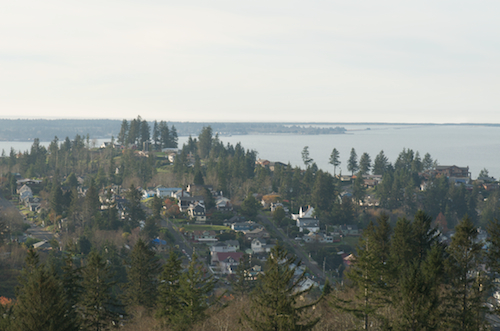 "Uptown" Astoria as seen from the park with the Astoria Column (which was closed this time).

Back at work i’ve now moved from my dark and rather sad office into a new cube-ish thing which is huge. So huge in fact that i’m not calling it a cube, it’s a pen.