Today on Talk of the Nation the featured topic was blogs. The number one item put forward as the single most important aspect of blogging was “post all the time about important things.” One guest went so far as to say “if you only post now and then forget any hope of developing a community.” Of course that was followed by example after example of how only a tiny fraction of people actually make a living blogging. So my question is: what good is developing a community since for 99.99% of the bloggers out there blogging is a labor of love. Why attempt tilting at windmills by attempting to post important content all the time. I would suggest posting when you actually have something to say is the better course.

Dunno about all y’all but i’ll gladly wait for a good essay/post vs. more noise just for the sake of filling air.

2009 is officially here and aside from the looming end of the Bush administration, ongoing employment (for the moment), a new-used car, the sale of my beloved and very rusty Volvo, and continued acceptable health I have nothing to announce. For now Annette still lives in NYC, and I continue to live in Boise. We both find this condition increasingly onerous.

The end of the Bush era is a non-story. A good non-story, but a non-story nonetheless. It’s like cheering when the sun rises; we all knew it would eventually happen. I won’t be happy until the moronic idiot and his cronies are locked up in an Iraqi jail and subjected to regular foot beatings… and since that will never happen my happiness remains aloof. The singular worst presidency in the history of this country is coming to a close, but the damage is so extensive there is no hope for repair. Our country cannot go back to what we were before the Current Occupant took office. We have to repair and reinvent in equal measure. And Obama will have to piss off so many insiders the odds he’ll survive for a second term are slim at best. I long to be proven wrong on this point.

Ok, but now to stuff i actually know about: i have a new used car. It is a 1993 Range Rover Classic. I am the third owner. Let me start by declaring right from the start “Yes, the fuel mileage is abysmal around town.” Were i in need of a “commuter car” this would be just about the last car i would consider. However unlike most people i do not buy a car to drive it. I buy a car the same way i buy computers and software: they are tools to accomplish specific tasks. I buy Apple computers because using them is a joy rather than a chore. I buy cars for the same reason. 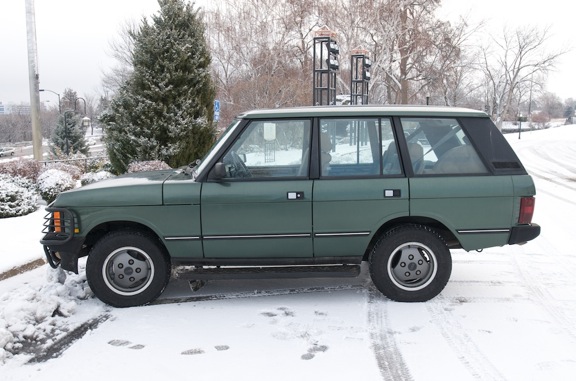 A prime example of a 1993 SWB Range Rover

I bought this car for one prime reason – to pull a small camper trailer and because, like Apple products, driving it is a joy. It is not a luxury vehicle (the yuppie Range Rover-as-status-symbol thing came later for this brand), it is a highly capable off-road vehicle and i intend to use it as such.

Annette and i plan to sell our deeply beloved VW Westy come this spring. We have enjoyed that vehicle for many years, but it is time to move on because our needs have changed. We now need a small, hard-sided camper unit that can be set up and left in place. The one problem with the Westy is once you set up camp you have to break camp if you want to drive anywhere. Yes yes, such horrors. Had you told me this when i bought the Westy i’d have said “wimp” and bought it anyway. It’s only now, after years of use, i’ve come to the conclusion that the Westy’s one major limitation is enough to persuade me to move on. My hope is i’ll be able to sell the Westy to a person who will be able to use it as it was intended, will care for it as it needs to be cared for, and will drive it with the same level of love i still feel when annette and i depart on a trip.

So let’s talk about my private oil crises, the Rover. You want to hear me say it? Ok. Fuel milage around town is, wait for it… about 10-12 mpg. Yes, you read that correctly: Ten to Twelve miles per gallon of gasoline. That is already taking into account that i drive with a very light foot, never exceed 2000 rpms, coast whenever possible, and have, and plan to maintain, the vehicle in near-top running order.

However, consider this: on the drive up from where i purchased the vehicle, between fillups, i averaged slightly over 20 miles per gallon. For a very heavy car cruising at 70-75 mph, powered by an under-sized V8 engine, that figure is respectable. The Vanagon Westfalia, with a flat-four engine just over half the size of the Rover’s V8, averages about 19 mpg on the highway.

Why is this? Simple: weight. The Rover weighs a ton. Actually, it weighs well more than two tons. Plus it has a very heavy drivetrain that is permanently in all-wheel drive. As the First Law of Thermodynamics states: The increase in the internal energy of a system is equal to the amount of energy added by heating the system, minus the amount lost as a result of the work done by the system on its surroundings which is the physicist’s way of saying “a body in motion will remain in motion unless acted upon by outside influences.” In other words getting a big, heavy car up to speed and holding it at that speed will take less energy than frequently changing that vehicle’s speed. Thus the reason for my statement about this being the last car i’d want for a commuter car.

Annette and i will drive this car as little as possible. We will walk, ride bicycles, ride my motorcycle, or simply do without rather than fire up this beast and drive to the corner store. Thus by keeping this aging car and its myriad parts out of the junkyard/landfill, by not buying into the myth that a more complex and vastly more expensive hybrid drivetrain is the way to “save the earth,” by eschewing the notion that driving is an American’s birthright, we hope to, on balance, consume less money and resources than the equivalent Prius owner. And, and this is key, we plan to go places a Prius can not go, and do things only a big, heavy, capable all-wheel drive vehicle can do.

We shall see what 2009 holds for the aforementioned plan, eh?