Nothing better than to get up at a reasonable time, breakfast on Oeufs en Cocotte, take a brisk hike up to Pilot Rock, then return home ahead of the rain and prepare Julia Child’s Beouf Bourguignon (p. 315 from the cookbook). The kitchen smells so good right now it’s almost a shame there’s only about 90 minutes cooking time left.

Couple of recipe notes: it’s probably not necessary to blanch the bacon (unless of course you happen upon true French salt-cured bacon). The amount of wine called for is exactly one bottle minus one wine glass worth. Somehow i doubt that’s a coincidence.

Oh, about the Oeufs en Cocotte: Annette gave me some truffle cream as a christmas present so I tried to recreate one of her favorite breakfasts from a restaurant back in Minnesota.

For two: Preheat the oven to 350. Boil a bunch of water and have it standing by. Dice some ham, sliver some good Gruyere, prep two heat-proof small bowls with oil or butter, crack two eggs into each bowl, add some of the ham and some of the cheese. Pour the boiling water into a baking dish of some kind. I used my go-to pyrex 13×9.

Place the two bowls in the boiling water… they shouldn’t float, it’s just a water bath to mitigate the oven’s heat. Put the whole thing in the oven for about 7 to 10 minutes. While the eggs are baking slice two brioche in half (did i forget to mention the part about having two good brioche on hand?) and lightly toast. When the eggs are done remove the whole contraption from the oven, dot the top  of each bowl with the truffle cream, serve immediately with the warm brioche and good coffee.

Regarding the hike… what can i say, this is Oregon. We met three other groups out on the trail doing exactly what we were doing. One group had a dog who liked being photographed. 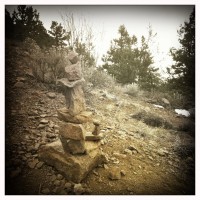 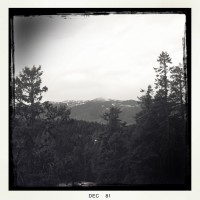 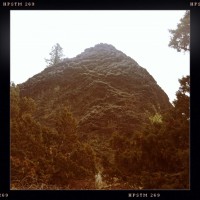 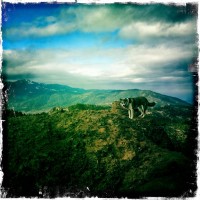 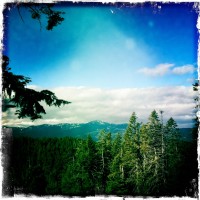