One of the best things about living in Oregon in general and Southern Oregon in particular is it’s gloriously easy to live 100% local. One person i know here raises pigs, a host of people grow vegetables, and a large cohort make wine. Really, think about it, everything you might want can be had for the cost of a bicycle ride. If you happen to drive a diesel you can even fill the tank from locally produced bio diesel.

But today’s topic is wine. Of the many local vineyards we sampled over the past few months we both agreed Trium had the best product. And more than just wine there was something special about the place as well. They don’t make their wines at the vineyard, production is handled off-site, but off-site in this case is just down the road a bit. Mostly this is due to the small volume of finished wine produced. The recent release of their cab sauv was only 75 cases. 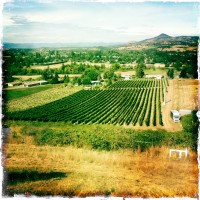 So Annette and i joined the wine club at the income-appropriate level of 2 and 2. We received two bottles each of the ’06 Grower’s Cuvee and the ’08 Cabernet Sauvignon. The Cuvee is a blend of 62% Merlot, 21% Cab Sauv, and 17% Cab Franc. Both of these wines are, to use enological jargon, really nice.

There’s so much hoopla and effete goings on about wine it can make one dizzy. Yes, i’ve taken wine tasting and appreciation courses and i know a chunk of the jargon, but the bottom line for me remains “does it taste good?” I’ve been fortunate to have a couple “holy shit” moments with wine; moments where i’ve taken a sip and felt entire regions of my brain light up as it tries to interpret the onslaught of sensation. And i hasten to point out that the purchase price, while related, is not a guarantee of anything. What makes really nice wine is the care that goes into its creation. It’s a living thing, after all, and living things push back against ill treatment.