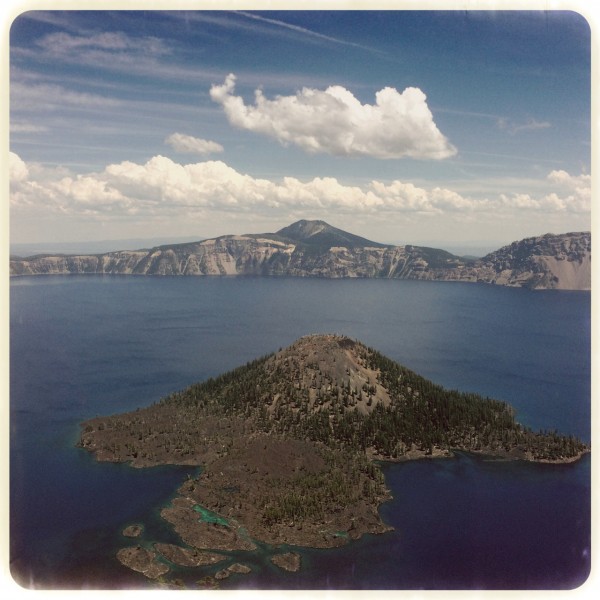 Wizard Island, the lake, and Mt. Scott beyond as seen from The Watchman Tower.

Were it not for the unbridled enthusiasm of Angel McDonald I never would have done what we did yesterday: climb three peaks in Crater Lake National Park in one day.

It’s actually not all that hard, doing the climbs. The hard part is deciding to do it and then following through. The climbs which we did in the following order: Mt. Scott (highest point in the park), The Watchman (easiest, most popular climb), and lastly Garfield Peak, which should not be underestimated for difficulty.

Mt. Scott is a wonderful hike and should be on everybody’s bucket list. Listed as “strenuous” since it ascends pretty quickly, the trail surface is very good with plenty of shade so it feels more like a “purposeful walk” than a strenuous hike. There are no “gotcha” moments where a misplaced foot fall ruins the day. It affords spectacular views of the lake and the whole region from the summit. 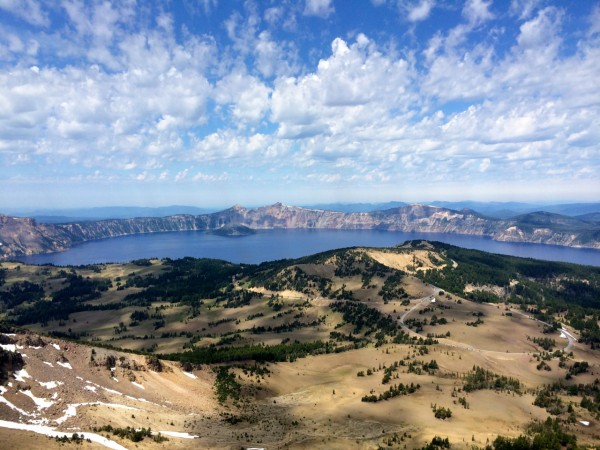 The Watchman trail is by far the easiest climb of any respectable ascent and hence the most popular in the park. The trail surface is nigh paved and nearly as wide as a road. Angel jogged up. I didn’t jog, but kept a brisk pace. Unlike the lookout atop Mt. Scott, you can actually get up to the narrow wraparound deck of the The Watchman Tower. 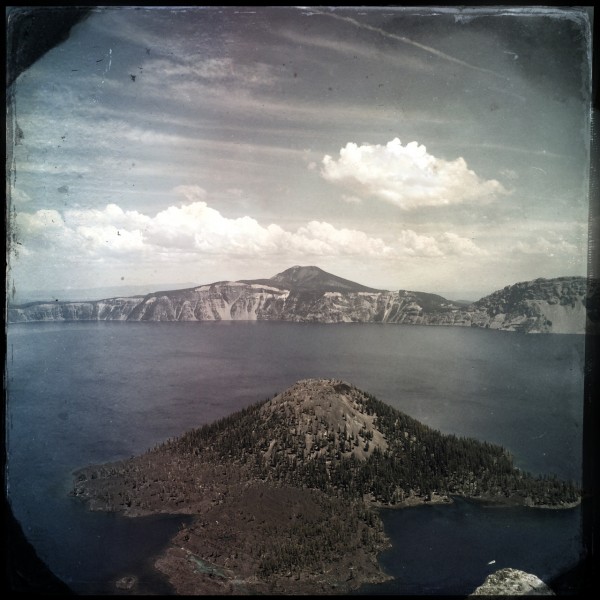 Wizard Island, the lake, and Mt. Scott beyond as seen from The Watchman Tower in Hipstamatic splendor.

Which brings us to the Garfield Peak experience. Also listed as “Strenuous” this trail lives up to that designation. It ascends steeply with a trail surface ranging from jagged rock, to mud. Yes, mud. Much of the trail is narrow with a precipitous fall to the left and right as you navigate the switchbacks. Also there is precious little shade, so if you’re saving it for the last hike of the day be prepared for heat both from above and below.

The trail lies along the actual rim of the caldera at several points thus providing some of the most dramatic views possible, but the summit is oddly disappointing. For such a jagged rocky climb the summit feels like a big bald knob, with the only shade being provided by a sole pine tree set way back from the edge. Don’t get me wrong, it’s completely worth the climb, just keep the expectations under control.

One amusing part of the day was ending the descent from Garfield at the Crater Lake Lodge. There we were, all hot and sweaty and boisterous, crashing the beautiful people’s afternoon tea out on the deck. It actually worked out fine despite my initial discomfort and proved to be the best-tasting Corona I’ve had in ages.

In all a simply glorious day and again I can’t credit Angel McDonald enough for making it happen.