Day 417 – Opposite of Locavore 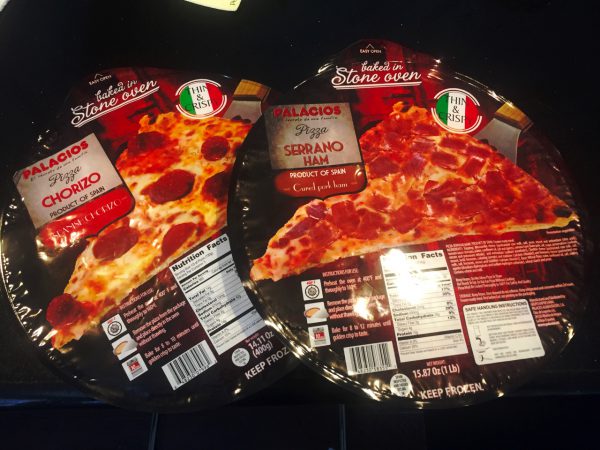 The two frozen pizzas above are an nigh perfect illustration of the preposterously unsustainable trajectory we as a species currently travel. And, just to add insult to injury, they tasted terrible.

The local Fred Meyer is running a somewhat forced “taste of Spain” promotion. They do this from time to time. I think the last country of interest was Italy. This one seems to be going poorly as many of the featured products are increasingly on sale and not exactly flying out the door. I bought the pizzas for two reasons, first they were cheap, and second I wanted to actually possess, if even for a short time, something so incredibly bizarre as frozen pizzas from Spain sold in Milwaukie, Oregon.

I mean, think about it! Pizzas, assembled half a world away, frozen, shipped across the Atlantic and then shipped across the United States. The amount of diesel expended, the total amount of energy involved, just leaves me speechless. And for all I know  these things might have come by air. All to end up being sold for $3.99 each.

I’m not opposed to growing a global, interconnected economy, but c’mon: frozen pizza? Like so many of the tattooed hipsters whom I want to ask “what were you thinking?” so it goes here. Of all the food products Spain could offer, who selected frozen pizza as one of the chosen items? Frozen pizza? Really?

Oh, and to make it even more unsettling, these things were horrible. The crust was a giant water cracker, the “Serrano ham” was an insult to any self-respecting hog, and the chorizo had a unsettling tinge of both color and flavor suggesting “beyond the sell-by date.” One bite provided a week’s worth of sodium.

Both pies went in the trash after sampling a single slice from each.

The organic matter will eventually decompose assuming the receiving landfill has adequate oxygen percolated through the mass. The plastic container and plastic lid will probably be around long enough to see the next ice age.

As penance for this commercial transgression I swear to ride my bicycle or take mass transit to the grocery store for a week and buy only objects readily identifiable as coming from local sources.