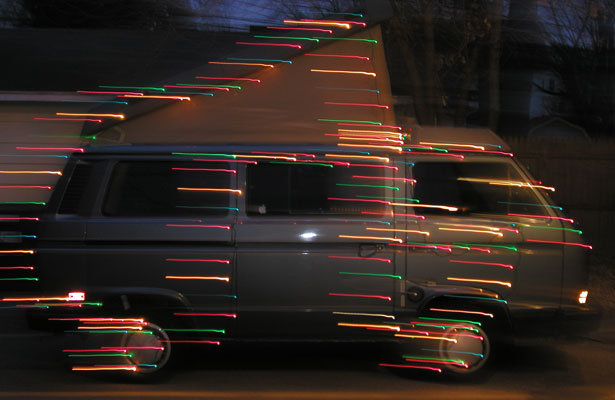 The Vanagon is now gone. Sold to a retired couple from Salt Lake City. Didn’t get my asking price, but who does these days.

So i’m comparatively cash-rich right now, but that won’t last considering i just spent about $700 on a replacement equalizer hitch.

The van came to me in Minnesota by way of a convoluted route involving two previous owners. I nearly wrecked driving the van up from St. Louis when all four wheels of the van crossed ice filling the rutted roads of Iowa . I went through a period of garden-variety buyer’s remorse and was later convinced i’d made a life-altering mistake that would lead to financial ruin.

Those phases eventually passed and what followed was a picture postcard VW camper relationship complete with seemingly endless love/hate cycles.

Early on Annette and i camped from the van every chance we got. We closed our time in Minnesota by doing a multi-day “loop tour” of the whole state.

After surviving the rather harrowing trip from Minneapolis to Boise in early spring we continued using the van to explore the latest in a series of adopted home states. We discovered what parks where near enough to provide a quick escape for a weekend and what parks were not worth the trip.

The van performed flawlessly, that is to say it was always slow, rather ponderous to drive, got fair to middling gas mileage, required a sizable investment of money and time to keep up, and invoked moments of terror when it stumbled or sputtered while we crossed some comparatively remote region.

We lived out of the van for weeks at a time and visited a raft of beautiful places all the while never worrying about rain or wind. It was our step-up from tent camping.

But now it is gone. With any luck the new owners will enjoy the car as much as Annette and i enjoyed it. I can only hope they’ll care for it, listen to its sounds and keep whatever promises they make when it acts strangely but still returns them home.